​Clothes through the decades

In history we are looking at the evolution of clothes through the decades.​​
Click on the links below to learn more. 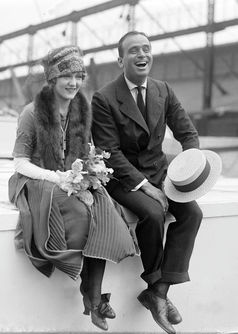 1920's​
The flapper style is the style most people think of when they think of 1920's fashion. Flapper women chopped off their hair into a short, almost masculine style. They wore short, loose fitting dresses. Big, fancy, straw hats gave way to smaller hats such as cloches, a simple hat shaped like the bell of a flower pot. These topped the women's newly bobbed hair.
Throughout the decade, men wore short suit jackets, the old long jackets being used merely for formal occasions. In the early 1920s, men's fashion was characterized by extremely high-waisted jackets, often worn with belts
Velvet, lace, muslin, and silk, used for wealthy children's clothes, were set aside for special occasions. In the 1920s, children wore clothes made of cotton and wool, with knit jerseys, cardigans, serge skirts, and shorts being common. 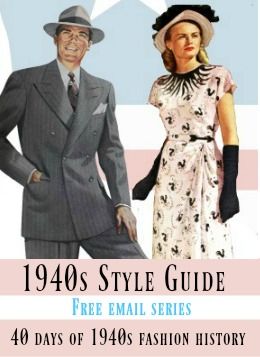 1940's
In a nutshell, 1940s women’s fashion was about creating an hourglass silhouette with masculine details: padded shoulders, nipped-in high waist tops, and A-line skirts that came down to the knee. This was the everyday shape for clothing, from suits to dresses. Even pants had a similar high waisted, wide leg shape. If a woman was not naturally an hourglass shape, the clothes were designed to help her achieve the look. Being put together, cheerful, and practical was the job of women during WWII.  1940s fashion accessories such as hats, gloves, handbags, and jewellery completed an outfit, while natural makeup with bright red lips painted a happy face during difficult times. Women’s clothes took on a masculine militant look with the invention of shoulder pads. Every dress, blouse or jacket was fitted with shoulder pads that extended just past the edge of the shoulder. This made for a boxy or square neckline and shoulder angle. Sleeves were often puffed up a bit with gathers at the top and extended down to just above the elbow.
1940s men’s fashion for day, sport, or evening was styled to make a man feel “larger than life.” During 1941-1945, WWII fabric rations limited cloth to make suits but not style. Middle class men chose basic business suits that haven’t changed dramatically since the beginning of the century. The notorious Zoot Suit with its bright colors, baggy legs, and long jackets was a complete deviation from the norm — an underground rebellion worn by inner city youth.  What makes 1940s men’s fashion unique to the decade is the cut of the clothes, the patterns, and the stylistic details that demonstrated one’s patriotic support of his country (or lack thereof). 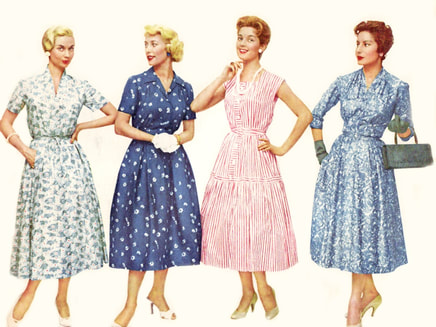 There are two classic dress shapes of the 1950's. The most popular style today is the full skirt, tea length dress often called a 50's swing dress. The other very classy look was the form-fitting sheath dress often called a pencil or wiggle dress today. Both styles had modest, snug fitting tops with narrow high waistlines, and shin-length or tea-length skirts. Both styles were worn by women equally although the sheath dress was too impractical to wear as a house dress.
When men weren't wearing jackets or suits they were wearing sweaters or vests. Some businesses would allow the man to wear a sweater with a tie, sort of a 1950's“casual Friday” thing. Cardigan sweaters also made for a nice casual look.
Styles for boys clothing in 1950 include a variety of gabardine suits for boys and teenagers, corduroy bib and suspender longies for play wear and casual clothing, the ever popular award coat sweater for high schoolers to show off their clubs, and work outfits made of rugged army twill. For girls in 1950 skirt and jacket suits were popular and reflected styles that were also prominent in women's fashion like pleated skirts, bolero jackets and scalloped edges. Cotton overalls for younger girls' play wear were also popular and featured a variety of bib styles. For teenage girls dresses featuring plaids, fun stripes, and various novel features were the favourites. 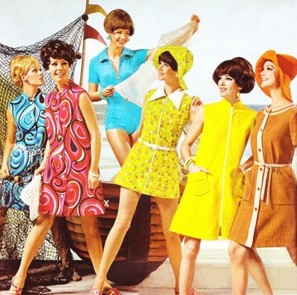 1960's
Sixties Fashion was exciting. It could be colourful or drab, fashion forward or laid-back, tailored or
relaxed, designer or tie-dyed it was a smorgasbord of styles. The Hippie movement favoured relaxed, comfortable and natural clothing styles although there were some very unique and imaginative things done with leather and beading, the norm for most college age kids was blue jeans and a tee shirt (tie-dyed or not).

Other very popular styles of the sixties which proved to be more enduring were the mini skirt and bell bottom pants.
The mini was the most seen fashion modification of the decade. It was worn by everyone from the trendiest celebrities to office workers, to housewives.

Space travel had an influence on 1960's fashion as well. The use of "modern" materials such as plastics and shiny metallic fabrics dominated the high fashion scene for a time.

1970's
​Disco looks began in the 1970s and was memorable for its hot pants look and Spandex tops.
Gold lame, leopard skin and stretch halter jumpsuits and white clothes that glowed in Ultra Violet lights capture the 70s Disco fashion perfectly.
Disco wear was never acceptable for day wear, but for night it was the only possible wear to enable the participants to be part of the action, to be part of the atmosphere of strobe lighting, mirror balls and spotlighting of individuals at any time.
Satin jackets that reflected the light and a medallion resting on a tanned chest in an open neck shirt with the collar turned up were the must have, however awful such fashions might seem now.  That is a fashion male individuals will never admit they followed, yet for many men it was the same as having the iPod accessory or mobile phone of today. 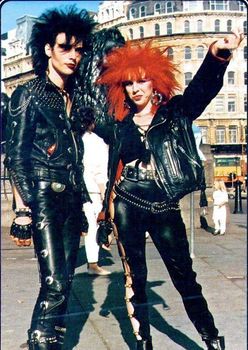 1980's
The 1980's are mostly known as the decade of punk rock. Punk clothing, which was initially handmade, became mass produced and sold in record stores and some smaller speciality clothing stores by the 1980's.

Metal studs, spikes and chains were important. Black leather, dirty looking clothes. Brightly coloured hair spiked into a Mohawk was the hairstyle to have. 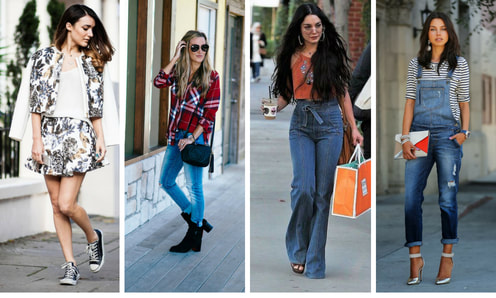